Fidel Castro & his Impact for the 21st Century Teleconference

You are invited to participate in this webinar/teleconference next week Monday evening. Also please consider sharing with others. Note that I have inserted some suggested readings/resources at the bottom of this email.

FIDEL CASTRO & HIS IMPACT FOR THE 21ST CENTURY 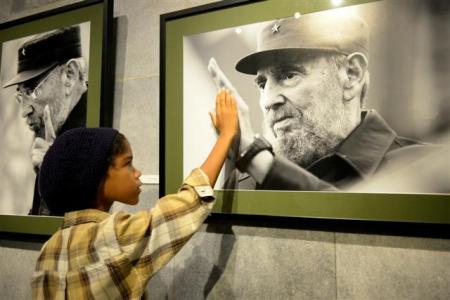 FIDEL CASTRO & HIS IMPACT FOR THE 21st CENTURY

A teleconference sponsored by the Peace and Solidarity Committee, of the Committees of Correspondence for Democracy and Socialism (CCDS) on Monday January 30, 2017

Art Heitzer and Otis Cunningham will make presentations followed by discussion, sharing of experiences, and questions.

Art Heitzer has practiced civil rights and employment law in Milwaukee, since 1975. He has chaired the National Lawyers Guild Subcommittee on Cuba for over a decade.  With the Center for Constitutional Rights, he has defended & advised over 1,000 U.S. travelers to Cuba. He has organized in support of Pastors for Peace travel challenges and has written legal analyses on the economic blockade of Cuba and on the Cuban Five. He has visited Cuba at least a dozen times in various capacities since 1972.

Otis Cunningham is a Pan-Africanist, anti-Colonial, anti-Aparthied activist starting in the late 1960’s. His first trip to Cuba was in 1983 with the Venceremos Brigade, and he served on the VB’s National Committee, 1985-2000. He has continued to work with individuals & groups traveling to Cuba, and to host Cubans visiting the U.S. He is the co-author, with Lisa Brock, of Race and the Cuban Revolution: A critique of Carlos Moore’s, Castro, the Blacks and Africa, Cuban Studies 21: 171-185 (1991). Among his recommended readings are Devyn Spence Benson’ Cuba, Antiracism, and a New Revolution (posted on our website athttps://wicuba.wordpress.com/2017/01/05/cuba-antiracism-and-a-new-revolution/  or  http://www.aaihs.org/cuba-antiracism-and-a-new-revolution/, and her book, Antiracism in Cuba: The Unfinished Revolution (UNC Press, 2016).

All are invited to attend via Webex or calling in.

Information as to how to connect is below.
Fidel Castro & His Impact for the 21st Century
Monday, January 30, 2017
6:00 pm | Pacific Standard Time (San Francisco, GMT-08:00    |  1 hr 30 mins
Meeting number (access code): 800 393 520
Meeting password: Fidel
via WebEx (you can join as a guest with no charge)
Add to Calendar
When it’s time, join the meeting.
Or join by phone
+1-240-454-0879 USA Toll
Global call-in numbers
Need help to join  the meeting?
IMPORTANT NOTICE: Please note that this WebEx service allows audio and other information sent during the session to be recorded, which may be discoverable in a legal matter. By joining this session, you automatically consent to such recordings. If you do not consent to being recorded, discuss your concerns with the host or do not join the session.