By Wisconsin Coalition to Normalize Relations with Cuba on October 21, 2014 • ( Leave a comment ) 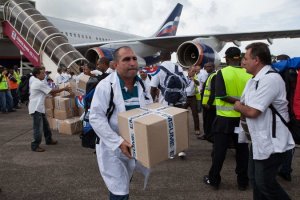 Cuba is an impoverished island that remains largely cut off from the world and lies about 4,500 miles from the West African nations where Ebola is spreading at an alarming rate. Yet, having pledged to deploy hundreds of medical professionals to the front lines of the pandemic, Cuba stands to play the most robust role among the nations seeking to contain the virus.

Cuba’s contribution is doubtlessly meant at least in part to bolster its beleaguered international standing. Nonetheless, it should be lauded and emulated.

The global panic over Ebola has not brought forth an adequate response from the nations with the most to offer. While the United States and several other wealthy countries have been happy to pledge funds, only Cuba and a few nongovernmental organizations are offering what is most needed: medical professionals in the field.

Doctors in West Africa desperately need support to establish isolation facilities and mechanisms to detect cases early. More than 400 medical personnel have been infected and about 4,500 patients have died. The virus has shown up in the United States and Europe, raising fears that the epidemic could soon become a global menace.

It is a shame that Washington, the chief donor in the fight against Ebola, is diplomatically estranged from Havana, the boldest contributor. In this case the schism has life-or-death consequences, because American and Cuban officials are not equipped to coordinate global efforts at a high level. This should serve as an urgent reminder to the Obama administration that the benefits of moving swiftly to restore diplomatic relations with Cuba far outweigh the drawbacks.

The Cuban health care workers will be among the most exposed foreigners, and some could very well contract the virus. The World Health Organization is directing the team of Cuban doctors, but it remains unclear how it would treat and evacuate Cubans who become sick. Transporting quarantined patients requires sophisticated teams and specially configured aircraft. Most insurance companies that provide medical evacuation services have said they will not be flying Ebola patients.

For the full article, check out the New York Times’ Opinion Pages Here.