Cuban Doctors at the forefront of Ebola Battle in Africa

By Wisconsin Coalition to Normalize Relations with Cuba on October 13, 2014 • ( Leave a comment ) 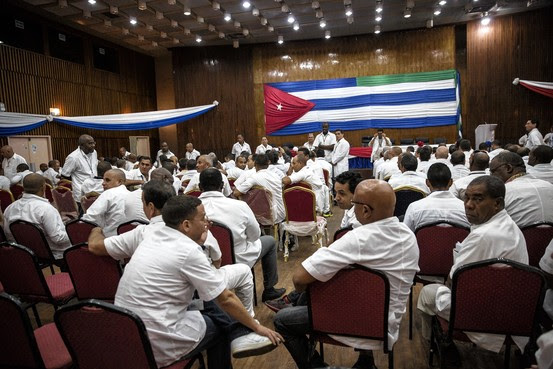 With risks growing that Ebola could flare on foreign shores, the U.S. is calling for nations to dispatch doctors and nurses to West Africa, where thousands of lives are on the line. Few have heeded the call, but one country has responded in strength: Cuba.

In the weeks since U.S. President Barack Obama sent the first of nearly 4,000 troops to West Africa, the struggle to quell Ebola has created odd bedfellows. Perhaps none is quite so odd as the sight of Cuban doctors joining forces with the U.S. military to combat Ebola in West Africa. Cuba has long had an antagonistic relationship with its northern neighbor, the U.S.

Aspiring global heavyweights China, India and Russia have done plenty of business in Africa, but their contributions to fighting the Ebola epidemic have been underwhelming thus far. And nations with some of the world’s most advanced health-care systems have come too late with too little to the crisis, said leaders from Ebola-affected countries.

“The international response was slow,” said Liberian President Ellen Johnson Sirleaf. On Thursday, she pleaded for more medical personnel, speaking from the capital Monrovia to a World Bank Ebola conference in Washington. “More than ever, we need qualified and dedicated staff to join the fight against Ebola.” (More: Spanish Hospital Says Condition of Worker With Ebola Worsens)

Cuba has answered that call. It has sent 165 health workers to hard-hit Sierra Leone, a disproportionately large number for a tiny island nation of 11 million people. They join cadres of medical workers in West Africa from several nations who are under the auspices of aid groups. Doctors Without Borders says it has about 250 international staff in the region and nearly 3,000 working on Ebola there overall.

Cuba has long played an outsize role in Africa, sending troops to battle the South African military out of Angola, and training guerrillas who joined Nelson Mandela ’s armed struggle against apartheid. In the early 1960s, Che Guevara traveled to try to foment revolt in the east of newly independent Democratic Republic of the Congo—only to find himself in the company of men he later judged more interested in plunder than global socialism. (More: Congress Holds Up Most of the Funding for Defense Department’s Ebola Fight)

“We can’t liberate by ourselves a country that does not want to fight,” he wrote back in a dispirited letter to Cuban leader Fidel Castro.

Instead, the Argentine-born physician-turned-revolutionary suggested Cuba send something else: doctors. Since then, Cuba has sent tens of thousands of health workers to foreign nations. The country sent 2,500 health workers to Pakistan after its 2005 earthquake, and another 1,500 to Haiti after its 2010 earthquake, said Jorge Delgado Bustillo, head of the Cuban Medical Brigade to Sierra Leone.

By comparison, the 165 medics here represent a cautious response.

“We work on malaria, cholera, dengue, a disaster situation, floods in Venezuela, floods in Guatemala, floods in Belize,” Mr. Bustillo said. “But Ebola? It’s a first time for the Cubans.”

In a speech this month, Mr. Castro appeared to be recalling Cuba’s military exploits ahead of the doctors deployment to Sierra Leone. He called them “an army of white coats,” and vowed: “Honor and glory to our valiant fighters for health and life!” according to the excerpts from the speech that appeared in the island’s state-owned Granma newspaper.

The Cubans play down any rivalry with the Americans. “Against Ebola, we can work with anyone,” said Mr. Bustillo. “The United States? Yes, we can.”

On Wednesday, the Cuban flag stretched across an entire wall in a conference center here, as doctors squirmed in their seats, waiting more than an hour for Sierra Leone’s government to officially welcome them. An Australian World Health Organization official responsible for training them on Ebola care watched in concern as the Cubans swapped hand-clasps, pats on backs and other potentially hazardous displays of physical affection. Public-health officials warn Ebola can spread on contact, with the virus carried in bodily fluids like sweat.

“They’re a very cuddly people,” said Katrina Roper, a technical officer with the U.N. agency. “Tomorrow will be me explaining why they have to stop shaking hands and sharing things.”

Secretary of State John Kerry on Wednesday exhorted more nations to send health-care workers and other forms of assistance. “We need people to step up now,” he said.

That the U.S. finds itself reliant on a Cold War rival underscores the lopsided humanitarian response to the Ebola epidemic. The U.S. is the biggest donor nation, having pledged to send nearly 4,000 troops and nearly $400 million in other aid. It is sending 65 U.S. Public Health Service Commissioned Corps officers to staff an Ebola ward for health-care providers in Liberia. More than 2,600 health volunteers have signed up on a government website for possible deployment with aid organizations.

Africa’s biggest trading partner, China, has said it would provide $1 million in cash, $2 million in food and specialists each to Liberia, Sierra Leone and Guinea. The Asian giant is also sending 170 medical workers to Liberia, state-run Xinhua News Agency reported. Currently, 58 Chinese are staffing an Ebola-treatment ward and blood-testing lab off the side of a Chinese-built clinic. Of these, 35 are drivers, handymen and chefs, said Guo Tongshing, the clinic’s chief doctor.

India, with deep trade links and air connections to West Africa, recently pledged to contribute $12.5 million, but no medical personnel. Brazil, which has spent a decade wooing African nations across the Atlantic, has contributed about $413,000.

Russia, which has also sought to rekindle Cold War allies here, sent a team of eight virologists to Guinea, once a Soviet outpost, and protective clothing.

South Africa—a country eager to cement its leadership role on the continent—has sent a mobile lab to Sierra Leone. There is no record of any monetary contribution from the country.

African health workers are part of the crisis response, though. The African Union has sent about 75 medical workers, and Uganda, which has extensive experience with Ebola, has sent 15.

Meanwhile, Japan, the world’s third-richest economy after the U.S. and China, is sending $40 million to the cause, but no personnel. Toyota Motor Corp. plans to donate cars to help transport patients.

Even France, the European country with the most military bases in Africa, has been slow to send in army medics. The former colonial power will construct and operate a 50-bed clinic in Guinea, staffed with 15 French medics at a given time, in addition to Red Cross volunteers, the state agency managing medical reservists said.

The U.K. is sending in another 750 personnel to help build the dozens of clinics needed in Liberia and Sierra Leone. The clinics are required to isolate patients from their family members and break the viral chain of transmission. But it isn’t clear who will staff those clinics.

Liberia alone needs about 10,000 qualified health-care workers, and a similar number are needed in Sierra Leone, the U.S. government has said. So far, the largest single medical brigade is from Cuba in Sierra Leone.

“Cuba is the only one that I know is responding with human resources in terms of health doctors and nurses,” said Nkosazana Dlamini-Zuma, the chairwoman for the African Union and South African President Jacob Zuma ’s ex-wife.

It won’t be enough, said Abdulai Baratay, a spokesman for Sierra Leone’s government: “Even though we appreciate the Cubans…we still think that with the rate at which the virus is spreading, we need more people on the ground.”

Governments, China’s included, complain they simply don’t have enough experience with Ebola to send in large numbers: “This is a big challenge for our scientists,” said Qian Jun, team leader for the China Center for Disease Control Mobile Laboratory Team in Sierra Leone.

Indeed, there was no boot- or hand-washing station at the entrance of China’s Ebola ward in Sierra Leone’s capital of Freetown, a critical safety measure. Instead, there was a family of cats living in the doorway, one sleeping on the steps.

“Every day our doctors, nurses, they come here on time,” said Dr. Guo, the head of the clinic. “But sometimes, the Sierra Leoneans, they don’t come.”

This is the void Cuba is filling. While consultants from the U.S. Centers for Disease Control and Prevention are lodged in Radisson Blu resort,—at more than $200 a night—the 165 Cuban medics are living three to a room in one of Freetown’s budget hotels. The hotel’s toilets are broken. Flies buzz around soiled tablecloths where the Cubans eat in cafeteria-style shifts.

“It’s not Sierra Leone that needs us,” said Yosvany Vera, a 36-year-old doctor working his way through a greasy plate of rice. “The world needs us.”