By Wisconsin Coalition to Normalize Relations with Cuba on October 29, 2014 • ( Leave a comment ) 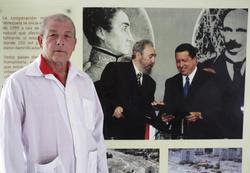 HAVANA (Reuters) – Cuban doctors and nurses departing for West Africa to combat Ebola consider themselves lucky. Among the 15,000 who volunteered, they are among only 256 who have been chosen for the job.

“There have been fights breaking out, heated arguments, with some doctors asking, ‘How come my colleague gets to go and I can’t?'” doctor Adrian Benitez, 46, said on Tuesday just hours before he was due to board a plane for Liberia.

Despite a global alarm over the worst Ebola outbreak on record, Cuban doctors are eager to travel to West Africa and start healing the sick.

Nicknamed as the “army of white robes” and citing a long history of Cuban medical missions in Africa and elsewhere, they speak of a sense of duty and are willing to assume the risks.

“We know that we are fighting against something that we don’t totally understand. We know what can happen. We know we’re going to a hostile environment,” said Leonardo Fernandez, 63. “But it is our duty. That’s how we’ve been educated.”

The Ebola virus has killed more than 4,500 people since March, mostly in Sierra Leone, Guinea and Liberia. The numbers include more than 200 healthcare workers.

Some Cuban 165 doctors and nurses have already arrived in Sierra Leone and another 91 were flying on Tuesday for six-month missions, with 53 destined for Liberia and 38 for Guinea.

Yet another 205 medical professionals have undergone a three-week training course in Cuba, with extensive practice in using the protective, full-body suits, but have yet to receive an Ebola assignment.

It is the latest example of Cuba’s medical diplomacy. The Caribbean island has dispatched medical brigades to disaster sites around the world since the 1959 revolution that brought Fidel Castro to power.

The communist government made 11 of the departing doctors available to reporters on Tuesday. All of them have been on previous overseas missions, and they all expressed pride in their mission, saying their families were supportive.

There is no proven cure for Ebola, and about half those who contract it die.

Several of the doctors repeated an often-cited slogan within Cuba’s medical culture: “We don’t offer what we have left over. We share what we have.”

“This little bit that we have, when people need it, we are capable of sharing. It’s a basic concept,” Fernandez said.

When Castro’s rebels took power in 1959, Cuba had 6,000 doctors, and half of them quickly left the country, the government says.

With economic aid from the Soviet Union, Cuba built a healthcare system that was the envy of the developing world, though some of those advances have been lost since the communist bloc collapsed.

Many Cuban hospitals have fallen into disrepair and Cubans say they have difficulty getting medical appointments or finding medicine.

With 83,000 doctors today, Cuba says it has 7.2 physicians per 1,000 people, one of the highest rates in the world. But with about 25,000 doctors working overseas, that ratio falls to about 4.6, even when counting 5,500 recent medical school graduates, according to Health Minister Roberto Morales.

While Cuba provides doctors and nurses for disaster relief free of charge, it also exchanges them for cash or goods on more routine missions. The island receives an estimated 100,000 barrels of oil per day from Venezuela, where some 30,000 Cuban medical professionals are posted.

Those recruited for the Ebola missions underwent three weeks of training at the Pedro Kouri Tropical Medicine Institute on the outskirts of Havana, where trainers set up a field hospital of tents to simulate conditions in West Africa.

Should any Cuban doctors or nurses contract Ebola in West Africa, they will be treated at a special site for international aid workers until they are cured or die, said Jorge Perez, director of the Pedro Kouri institute.

All of them will be held for at least 21 days of observation at the hospital upon returning to Cuba, the same as any visitor coming to the island from the affected countries.

Despite the risks and inconvenience, Ivan Rodriguez, 50, said his family was supportive and proud.

“I would have felt disappointed and sad if they would have been afraid for me to take this step,” Rodriguez said. “Now, there are 15,000 (volunteers). I’m convinced there could be 15,000 more.”