We are currently meeting via Zoom. Meetings are generally held every 2nd Tuesday of the month at 7:00 PM. Email us at wicubacoalition@gmail.com for the link to attend. 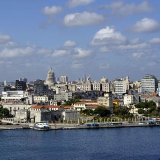 - Our Principles - The Wisconsin Coalition to Normalize Relations with Cuba consists of both organizations and individuals who have come together based on the points of unity and principles listed below. We hope you also subscribe to them and will join us. We support the normalization of relations with Cuba. We oppose any policy of our government designed to increase the misery of the Cuban people in order to obtain political gain. We oppose the ban on travel to Cuba; and the recently intensified U.S. economic embargo, which has restricted even food and medicine, and discouraged third countries that seek to trade with Cuba. We support and encourage increased person-to-person contact between the U.S. and Cuba, such as through religious, union, professional, and cultural organizations. U.S. businesses should be allowed to trade with Cuba on the basis of mutual benefit. We especially seek to overcome the artificial barriers dividing African-Americans in the U.S. from people in Cuba, where a vibrant Afro-Cuban culture continues to thrive. We also seek to particularly involve and promote activities by area residents of Latin American and Caribbean origin, so they may freely relate to our brothers and sisters in Cuba and help relieve their suffering in the current period. The coalition is non-partisan and non-sectarian. It is not affiliated with and does not support any political party or candidate. We do not presume to tell the people of Cuba what political or economic system they should adopt; that is their decision, on behalf of a sovereign nation with the right of self-determination. The coalition may share and forward information on related activities challenging the embargo that we, as a coalition, have not formally endorsed (such as study tours, and challenges to U.S. restrictions).